In 1987, a position as research assistant for the renowned Political Science Professor Jürgen W. Falter opened up at the Central Institute for Social Science Research at the Free University Berlin, and I applied for the job. During the five years I spent at the Free University in Berlin, I kept writing books and edited several academic anthologies together with other historians. Wissenschaftliche Buchgesellschaft, for instance, published an anthology on the subject of National Socialism and modernisation, and Muster-Schmitt-Verlag published a small Hitler biography by me in its “personality and history” series. Together with the US historian Ron Smelser I launched a large-scale book project on biographies of the Nazi elite during that time that was also published by Wissenschaftliche Buchgesellschaft. Smelser has excellent contacts because he was President of the German Studies Association at the time, a group of US academics specialising in German history and politics. The association invited me to give a talk on the subject of my doctoral thesis at their annual convention in Albuquerque. Smelser and I recruited renowned historians worldwide who had studied the biographies of leading figures of the Third Reich – such as Goebbels, Göring, Ley, Himmler, Strasser, among others – and invited them to contribute to the project. The work was eventually published in a two-volume German edition and a single-volume English edition titled “The Nazi Elite” (Palgrave MacMillan, NYU Press). Later, I supplemented the project with another anthology on the leading minds of the German resistance movement against Hitler, which I edited together with the renowned US historian of the German resistance, Klemens von Klemperer, and another historian.
Aside from my book projects, I wrote hundreds of reviews for historiography books, both for academic magazines and regular newspapers, especially for the renowned German dailies SÜDDEUTSCHE ZEITUNG and FRANKFURTER ALLGEMEINE ZEITUNG but also for other papers such as RHEINISCHER MERKUR, DIE WELT, and others. Even the prestigious weekly DIE ZEIT and the left-wing daily “taz” carried my reviews, though my political position had ceased to be leftist by that time.
My intention was to write another post-doc thesis about a phenomenon called “national neutralism” in the Federal Republic of Germany, in order to qualify for a professorship, this being the required procedure for tenure in Germany. At the time, with the country still divided in East and West Germany, the term “national neutralism” covered political grouping that could not imagine a reunified Germany except as a neutral country. In this connection, I studied German post-war politicians such as the Liberal Thomas Dehler, the Social Democrats Kurt Schumacher and Gustav Heinemann, the Christian Democrat Jakob Kaiser, and the publicist Paul Sethe. In 1990, I wrote a book whose title translates into “Adenauer’s Foes, Zealots for German Unity.” While my work on National Socialism had been commended mainly by conservative historians, the new book was warmly welcomed by Social Democrats. Prominent Social Democrats, such as Peter Glotz and Egon Bahr wrote favourable reviews of it, and Erhard Eppler, a rather left-leaning Social Democrat, wrote the preface to the paperback edition. 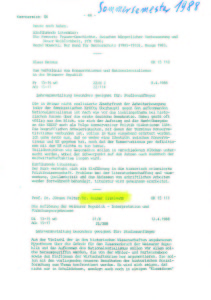 Course-directory of the FU Berlin (18 pages)