In 1994 I joined the German Liberals (FDP) – and while I have long ceased to involve myself in active politics, I remain a member to this day. The Berlin chapter of the Liberals was torn by massive tensions between the right and the left wing. I was part of the right-wing camp around the former Federal Prosecutor General, Alexander von Stahl. Together with him and several other Liberal politicians I published a list of propositions for the liberal renewal of the FDP, a move that sparked controversy inside the party and beyond. Another idea that provoked a nationwide discussion was a newspaper ad that I had phrased for 08 May 1995, the anniversary of V-Day Europe. It was signed by many hundreds of people, most of them from the ranks of Christian Democrats and Liberals. Signatories included a Federal Minister (CSU), the honorary chairman of the CDU/CSU Parliamentary Group, and a former Federal Minister (SPD). The background to the ad was this: Certain people had announced they would celebrate the day, 08 May, as “Day of Liberation,” they way it had been done in Communist East Germany. Our ad quoted a thought phrased by the first President of the Federal Republic of Germany, Theodor Heuss, a Liberal, that highlights the ambivalence of the day: On the one hand, 08 May 1945, signifies the liberation from the Nazi dictatorship, to be sure. On the other hand, it also marks the start of renewed suppression in East Germany. Moreover, the post-war displacement of Germans from the territories lost should not be forgotten, we felt. In one of the best-known talk shows of the time, “Talk im Turn,” that was hosted by Erich Böhme, former Editor in Chief of DER SPIEGEL, I got to discuss the significance of the day with Ignatz Bubis of the Central Council of Jews in Germany, with the historian Arnulf Barin, and others

.
The political development in Germany gave me cause for general concern. The renowned pollster Elisabeth Noelle-Neumann made material from polls of the past decades available to me, whose analysis permitted only one interpretation, I thought: The value of liberty was increasingly taking the backseat to “equality” for the people of Germany. The political spectrum of the Republic had undergone a clear shift toward the left. It prompted me to publish a book on the ominous political trend in Germany in 1995 (“Wohin treibt unsere Republik?”). These were the years when the country was governed by the Christian Democrats under Helmut Kohl and the Liberals. The Social Democrats had officially ruled out an alliance with the Greens and the extremely leftist PDS on the Federal level. I put no faith in these protestations. Instead, I warned that the Social Democrats, and even the Christian Democrats, kept edging closer toward the Greens. I also noted that the Social Democrats were increasingly willing to collaborate with the extremely leftist PDS, the successor of the SED that had run the single-party state of East Germany. As far as I could see, this meant that the anti-totalitarian consensus on which the Federal Republic had been based prior to the reunification was steadily eroding. Hence my book cautioned against a development of the country into a watered down version of Communist East Germany once a left-wing coalition of Social Democrats, Greens and former Communists (the PDS, which later renamed itself “Die Linke”) took power.
My criticism of the political left earned me some applause from the wrong corner, that is, the political spectrum on the extreme right. Not incidentally, this was the very corner in which the left tried to push me, but where I did not see myself at all. I found myself compelled to acknowledge that it was becoming increasingly hard in the name of so-called “political correctness” to discuss certain issues in a rational manner. Faced with this situation, I decided to take my leave from the political arena as an active player. 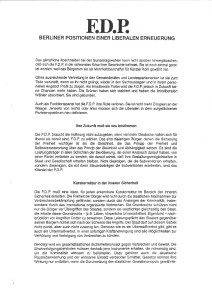 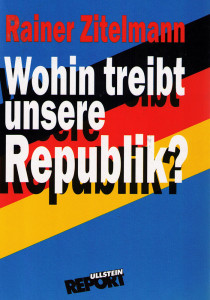