Here is an essay I wrote on the French philosopher Helvetius when I was seventeen. I got a very good grade, just short of “excellent.” At the time, I wrote many such essays. I still have an entire file folder of them. They tended to focus on parliamentarianism and council democracy, on Marxist theory of values, or on the causes that led to World War I. They all took a rigidly Marxist angle. By then, I had turned from a dyed-in-the-wool Maoist (still a member of the so-called “ML” group whose logo flaunted the counterfeits of Marx, Engels, Lenin, Stalin and Mao) into a Marxist who read Wilhelm Reich instead of Lenin. Reich had been a student of Sigmund Freud, and had attempted to merge the theories of Freud with those of Karl Marx. I was fascinated by the combination of Marxism with psychoanalysis, and read all of Reich’s writings as well as the main works by Sigmund Freud. While still considering myself a Marxist, I became less dogmatic and doctrinaire. At the same time, the Communist grouping I belonged to, the KPD/ML, fragmented into many rival factions. I initially sided with one of these factions, but moved on to organise a reading group devoted to reading Marxist literature. 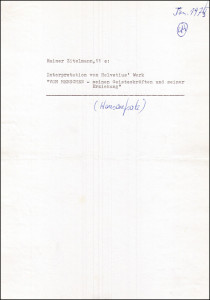