During the early years of Dr. ZitelmannPB., running the company consumed too much of my time to permit any book writing. For many years, I spent weekends composing IMMOBILIEN NEWS DER WOCHE, the weekly German edition on which our biweekly GERMAN REAL ESTATE NEWS is based. For nearly ten years, I wrote the newsletter myself, which adds up to a total of 5000 single-spaced pages. Every Friday, I looked through several folders containing the week’s newspaper articles on real-estate-related issues. These were compiled by in-house staff who screened about 40 dailies, trade papers, and business papers systematically for these items. My job was to summarize and comment a selection of the most important news, and to compile them into a digest-style newsletter. Then as now, the IMMOBILIEN NEWS DER WOCHE newsletter is circulated among several thousand executives in the German real estate industry (in 2006, we added GERMAN REAL ESTATE NEWS, its English edition that contains only those news that would be of interest to international readers, and that is mailed out every two weeks.
The reason I wrote IMMOBILIEN NEWS on weekends was that I tended to be out of town during the week, tending to clients in Munich, Frankfurt, Cologne, Düsseldorf or Bonn. Eventually, I took the time to train a team of several in-house staff to summarize the articles for the NEWS and thus to take the job off my hands. Commentaries and book reviews are still penned by myself, for the simple reason that I love writing them, and that ideas for them come easy. Lately, my commentaries have expanded from real estate topics to cover economic policy issues, too. These can be found (many of them in English) in my blog http://www.zitelmanns-finance-blog.com/.
More or less delegating the NEWS to competent staff has given me the time to write again on weekend, and I went back to writing books. The first of my recent books came out in 2010 and has since been translated into English under the title “Dare to be Different and Grow Rich. Secrets of Self-Made People.” It is based on the biographies of more than 50 highly successful personalities, some of which I interviewed in person. The book was supposed to find an answer to the question why some people achieve so much more in life than others. Soon after the book had been published in Germany, foreign companies signalled interest and bought the book rights. It has since been, or will be, published in India, Korea, the Czech Republic and Taiwan. Another book, this one about the need for executives to play an active role in the corporate communication of their companies, followed a year later (the title of the yet to be published English edition being “Sharpen Your Message”). The book contains the gist of my consulting philosophy, the same that my company applies to its clients, too. A third book I wrote soon after was “Speaking of Success”. It contains 140 quotes – from Cicero to Goethe, and from Steve Jobs to Warren Buffett. Having gathered the quotes, I commented each of them to highlight their significance for today’s reader along with the ways in which their wisdom can help people to achieve the goals they have set for themselves and to live a successful life. 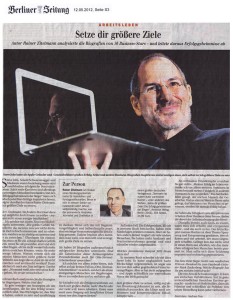 Click here to read an interview with me. By Andrea Frey