On 04 March 1998, I founded BERLINER IMMOBILIENRUNDE, a real estate panel regularly convening in Berlin. Initially, it was conceived as a roundtable for real estate companies in Berlin whom I had gotten to know on the job at DIE WELT. Congregating in the evening, the number of people attending the panels rose from an initial 30 to 50 and eventually to more than 90, as IMMOBILIENRUNDE gained in appeal. When the governing coalition of Social Democrats and Greens passed the aforementioned “tax trap article” 2b and the so-called minimum taxation (Art. 2, Sec. 3, Income Tax Act), I hosted the first all-day panel event, charging a conference fee for the first time. This marked the moment BERLINER IMMOBILIENRUNDE was truly born, and it was from this time onward that it evolved into the leading organiser of conventions and seminars for the German real estate industry. What helped was the fact that I had developed a keen sensibility for topics that industry players took an interest in. Initially, such topics revolved around tax issues above all. In an indirect sense, I benefitted as host from the incessant passage of new legislation by the Social Democrat / Green coalition Government, each law hazier than the next. Market players felt a huge need to clarify just what the often verbose and poorly crafted laws and ordinances might mean. I managed to recruit politicians, tax officials from the Ministry of Finance or the Inland Revenue Authority, fiscal judges of the Federal Fiscal Court, as well as leading tax law experts as rapporteurs for the events. It was also the first time that I became active as an entrepreneur in my own right – my employer Axel-Springer-Verlag had permitted me to pursue this ancillary activity, not least because my work as a journalist benefitted from it. The success of BERLINER IMMOBILIENRUNDE (with more than 260 panel events hosted to date) encouraged me to think about self-employment and starting a business. 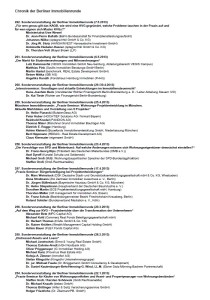 Read a compilation of all BERLINER IMMOBILIENRUNDEN (30 pages).