At age 24, still a student at the time, I published my first academic essay as part of an omnibus review in the specialist magazine NEUE POLITISCHE LITERATUR. Its title translates into “Hitler’s Achievements – Tentative Explanations in Hitler Studies.” It was indeed an issue that preoccupied me: How on earth did a man like Hitler manage to win popular support? My feeling was that the approaches taken by historians so far explained the mystery only to some extent. So I resolved to dig deeper and find out. I approached one of my professors, the internationally renowned historian Prof. Dr. Karl-Otmar Freiherr von Aretin, with the idea to write a doctoral thesis on the subject. Having applied for a grant for the project, I was awarded not one but three stipends – one by a Christian student organisation, one by a foundation, and one by an academic institute. In 1984, I had completed my state exam with grade average of “excellent” and passed “with distinction.” And Professor von Aretin had written in his assessment required for the grant application that I was “without doubt the most gifted student I have met in 20 years of teaching.” The stipend I picked sustained me financially throughout the two years it took me to write my thesis. 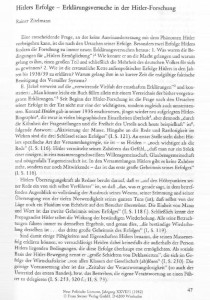 Click here to read the article from NPL (22 pages).