The challenge of writing for the daily DIE WELT as a journalist fascinated me, and in 1993 I transferred from Ullstein-Verlag to DIE WELT. For some time, I continued to act as consultant for the publishing house, but devoted myself mainly to the “Geistige Welt” weekly supplement on current intellectual trends. The articles I published as head of the desk had a polarising effect. What irritated many was the fact that conservatives did not have to apologise for being conservative here, but got the chance to tackle current left-wing notions head-on. While getting plenty of encouragement from conservatives, I got just as much flak from left-wing detractors. There were fierce debates even in the offices of DIE WELT itself. For a while, I found myself fighting a losing battle, until a new editor in chief took over, the liberally minded Thomas Löffelholz, who openly backed me and encouraged me to write political commentaries and historiographic contributions for DIE WELT.
It was an interesting time, and I got to meet many impressive personalities, among them the present President of the Federal Republic, Joachim Gauck, with whom I conducted a lengthy interview, or the well-known pollster, Elisabeth Noelle-Neumann. 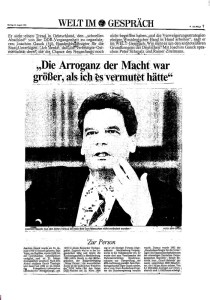